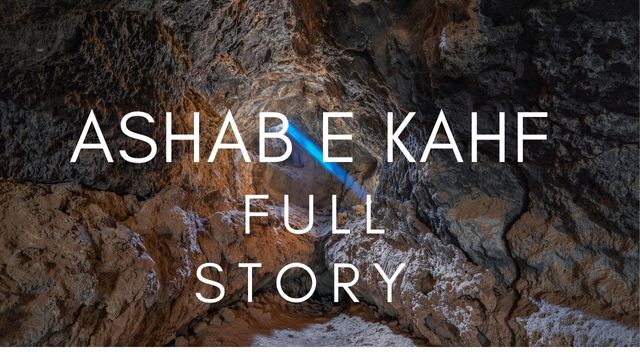 Ashab-e-Kahf, a city which is called Shahar-e-Afash, he lived in this city and he was a very respectable and honorable man and a noble person, he was the son of Rumi, the king of peace and he was also the Sardar of the room. Once Ashab-e-Kahf went to celebrate Eid with some people, he saw people worshiping stones and buttoy and when he saw all this, he thought that it is not right, it is a bad thing. We thought that worship should only be about one God, we should regard Him as our Lord, who is the Lord of heaven and earth and everything. Seeing all this, Asabe Kaif (Seven Sleepers) started leaving from there because he does not like idol and stone worship at all. Thi and Ashabe Kaif (Seven Sleepers) went from there and sat under the tree, then the second, third and fourth, finally all the Ashabe Kaif (Seven Sleepers) came and sat there under the tree, but these Asabe Kaif (Seven Sleepers) were intertwined with each other . I didn't know, but the power of faith and love mixed all seven sleepers, all seven sleepers were silent, and they thought that if we tell our hearts to these people, he would become our enemy, but all seven sleepers did. I do not know that all the Seven Sleepers sitting here under this tree do not like idol worship and shunning etc. All the Seven Sleepers were silent when they saw this. A young man who was sitting there said that friends, surely there is something for which we are all sitting here after leaving our com, my heart wants each person to tell one by one the reason why they left their com in this tree. After listening to this thing one said that hey brother the thing is that I don't like the ritual of my com because Allah is the owner of the heavens and the earth and our Khalik is the partner of Allah Wahdahu la then we will be none other than him. And why should you pray?

When the other man heard this, he said that for this reason I came here after leaving my community and hearing this, all seven of the seven said the same, after that seven of these seven became very true friends and then they worshiped Allah in one place . engaged

How did Ashabe Kahf get into the cave ?

Asabe Kaif (Seven Sleepers) intended to escape from his city and town at night and started his journey by running away from there at night. They said they also saw a dog while walking. When he saw them coming after him, he got scared, he thought the dog would bark at us, he tried hard to run away from the dog, but the dog kept following him, then Asabe Kaif (Seven Sleepers) also took him. He took it with him and continued walking, and the accursed king learned of their escape and began to pursue them with his army.

When Asabe Kaif (Seven Sleepers) saw this, he fled from the emperor and his army and entered the cave, the dog also entered the cave with them. After he fell asleep, that emperor also followed them to that cave, ordered his soldiers to enter the cave, the soldiers were ready to enter the cave, and as soon as they went to the cave, it was hot. He could not stand the heat and could not enter inside, then the emperor ordered that by pulling a wall out of the cave, we close it so that he died in it and his tomb was made in this cave.

But the servant to whom this work was entrusted was a noble man, he carved the names of those Asabe Kaif (Seven Frets) on a copper plate and placed it in the wall.

Then Asabe Kaif (Seven Sleepers) slept for more than 300 years and did not wake up, after some time the damned king also died, many times passed, the sultanate of many emperors changed, but he continued to sleep and as time went by Together there he became a noble king, then the people of the land began to believe in rumors and began to say that there is no life after death and people did not believe in doom, the emperor began to live in a lonely room and prayed or Allah my lord , there was a sign that made people believe in the resurrection of the dead and doom .

The story of awakening Ashab-e-Kahfa from sleep

At that time there was a man and he came to break the wall of this cave for his goats to live there, so his goats began to live there and the man broke down the wall of that cave, but the man did not enter the cave and from there Gone here, Allah woke up Asabe Kaif ( The Seven Sleepers) from sleep, the light was shining on his face and he was in good health and he was still young, after waking up from sleep they greeted each other, but they didn't know Was that those people woke up more than 300 years ago.

How did Ashabe Kahf get out of the cave ?

One of them, Ashab, went to a roti seller's shop for bread. In order to get food, he gave the merchant one rupee of an obsolete coin that had stopped circulating at this age because the coin was more than 300 years old, which everyone did not know that the merchant was surprised to see the coin because at this time the coin no one saw, the merchant showed the coin to a shopkeeper nearby, the shopkeeper saw it and then showed it to a shopkeeper nearby. Then he became like a spectacle, the merchants thought that this man had acquired some old treasure, so he brought such an old coin, they grabbed his Ashab-e-Kaif and took him to their prince, the prince was a noble man, he also asked them a question, where is the treasure, Ashab-e-Kaif replied that we have no treasure nor have we got it, the prince said that we cannot believe your words because the sun and date on this coin are three hundred and 300 years ago. and you are still young and we are old, you say this is my own coin. I have never seen this coin, Ashab-e-Kaif said anything I ask, tell me then the whole matter will be solved, he said it is fine.

Ashab-e-Kaif said tell me the situation of that shameful emperor, the princes started telling me that today there is no name of that emperor in this land. Hundreds of years ago there was a king with this name whose name was shameful. Ashab-e-Kaif said that tomorrow we will escape from that emperor's cave, my companions are staying in a nearby cave, come let me introduce you to them, then many people from the city reached the cave with that prince where Ashab-e-Kaif -Kaif's friends stayed

On the other side, the companions of Asaba Kaif (Seven Sleepers) were sitting waiting for their companion, they heard the noise and knocking of people, they thought that their companion had been caught and that a disgraceful army was coming here to find us. , they prayed to Allah. Then the companion of the Ashab-e-Kaif (Seven Sleepers) narrated the whole story and people saw the dog that entered the cave with the Ashab-e-Kaif (Seven Sleepers) now his nails were very long, then everyone understood that they had slept so long on command Allah and now they have been resurrected so that people can be sure that they will be resurrected after death.

When the prince reached the cave, he saw the copper box and opened it, in which he found a sign on which were written the names of the seven and the name of the dog, and it was written that this group was safe. to its bottom. In order to preserve himself, the emperor entered this cave to hide himself in fear of the latter, reading this label, all the people were surprised and all agreed to worship Allah, because Allah revealed such a sign to whom after death. definitely alive again.

The prince informed his king that he came with his wazirs and thanked Allah that Allah accepted his prayer, then the Ashab-e-Kahf told the king that we entrust you to Allah, that Allah will protect you and your country. Do it and protect yourself from the head of man and jinn, the emperor stood there he returned to his cave before the king Ashab-e-Kahf, Allah Ta'ala blessed him, the emperor ordered the entire cave to be established as a mosque and announced that every year people should come there as Eid.